I often do road-shows showing off TFS and VS to customers around South Africa. Usually I’m doing this with Ahmed Salijee, the Developer Platform Specialist (DPS) for Developer Tools in Microsoft South Africa. Ahmed is an amazing speaker (we’ve co-presented regularly) and is great at helping customers at a strategic level – and, as he likes to say, for his sins, he gets to help customers with their licensing queries!

Ahmed and I agree on most aspects of Application Lifecycle Management (ALM) using TFS – but one of the places we disagree on is the integration of TFS and Project Server.

Philosophy: Why You Shouldn’t Be Using Project Server in the First Place

If you don’t care to wax philosophical about Project Server, then skip this section. However, I think it’s important to step back and think about what you’re getting into if you’re planning on using Project Server for tracking software development projects.

Project Plans are made for environments where “change is bad”. Think about what Project Managers do – they create a plan, perhaps entering in requirements, breaking those down into tasks with estimates that they then farm out to team members. Then they do some curious things: they set milestones and they baseline the project. Let’s examine what milestones and baselining mean.

Milestones are points along the way that Project Managers use to answer a simple question: are we conforming to the plan? Baselines communicate an idea: “What we’ve planned is what we value – we should not deviate from this plan. If we do, then it’ll Be Bad”. Project Plans work well when tasks are exactly predictable and repeatable. Unfortunately, that’s not the case in software development. There are many reasons why this is the case – requirements are language-based, and as such are subject to misinterpretations. Coding is an abstract art – and as such it’s extremely difficult to estimate how long a task will take with any accuracy. Even if you get the code bits right, there are always unforeseen issues in integration of components, deployments, testing and so on. This is why people lie about progress – who wants to deviate from the baseline when the baseline is the Ultimate Good? We’d rather bend the truth about how far we are so that, on paper at least, we look good.

That’s why Agile has come to the form. The basic philosophy of any Agile technique is embrace the change. If we know things are going to change, then why not embrace the change? Let’s shorten cycle times so that we can get more rapid feedback – that way we minimize the risk of doing the wrong thing for too long. Let’s focus on measuring what value we deliver to business, rather than tracking conformance to a plan. Let’s make it concrete: imagine two teams. Team A sticks to the Project Plan closely, and after months of work deliver a system that is average (statistics show that most waterfall-based projects don’t even reach delivery, so we’re being optimistic about Team A’s delivery). Team B deviates widely from their Project Plan, deliver small components frequently and at the end of the project have exceeded expectations. Which team is “better”? The one that stuck to the Plan or the one that Delivered Value? And yet, if we really care about delivering value, why do we beat on teams to Stick To The Plan?

The good: avoid double entry. That’s about it. The integration allows Work Items added in TFS to be synced over to Project Server (or vice-versa). The integration simply means you don’t have to add (or update progress) in two places.

Perhaps I could add that once you have tasks in a project plan you can do resource leveling and all the other “voodoo” that Project is capable of, but frankly I think that that’s a waste of effort. Let’s imagine you’ve spent a couple of days doing all the leveling. After 3 days, Bob gets sick and is off for 2 days. So you re-level everything, carefully watching as your project drifts from the baseline. Next thing Joe comes and tells you he forgot that one of the changes he’s making will require an extra 2 days of refactoring. You adjust again, sweating a little as your plan deviates further from the baseline. You call up Frank and tell him he’ll have to work the weekend so that you can catch up. Every time something happens, you’re frantically re-adjusting your project plan. At the end, the actual is so far off the baseline, you wonder why you bothered in the first place.

If you train your teams to self-organize, you can track progress of delivered value (which is a much better thing to measure than “conformance to a plan”), rather than dictate who should be doing what when. As changes come in, you embrace the change and adjust course, smiling because change is now a positive thing – not a shame.

If you’re still insisting on integrating TFS and Project Server, there are some caveats that you’ll need to know about before embarking on the integration:

So since the integration is so hard (and fragile), perhaps you can consider this alternative: two way manual sync. This page explains in detail the differences between syncing to MS Project versus syncing to Project Server – what I propose here is a “middle ground” that give you best of both worlds without all the pesky configuration required for the integration extension.

Here are the steps to get going: 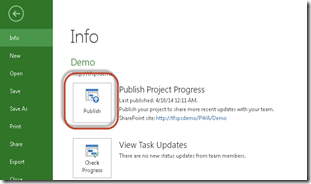 Now imagine that the TFS team is updating their tasks. To pull those updates in, let’s open the Project Plan again:

Finally, consider when new Tasks are added to the Plan in Project Server by another user.

I wrote a series of posts about integrating TFS and Project server – you can find the fist post here. Also, you can customize the field mappings between TFS and MS Project (not Server) using the guide in this post. Also, if you’re looking for a Timesheet solution and don’t want to use Project Server, then look out for Imaginet’s soon-to-be-released new Timesheet product.

Philosophically I think software development teams should stay away from Project Server (or Project Plans) entirely – focus more effort on measuring delivered value to business than conformance to a plan. However, this change is cultural (and needs to be pervasive) so I know that there are teams that are still going to have to integrate to Project Server. Before you embark on the long and painful process of using the server integration, consider using my two way manual sync to see how it works.

Last week I posted about how to integrate TFS and Project Server “manually”. In the post I did put in a bit of philosophy about why I think project plans can be a Bad Thing. Prasanna Adavi posted a thoughtful comment on my philosophy,