Update 2012-09-04: Brian Keller posted a fix that seems to work for this problem (so you can run the InRelease build without connecting to a physical external network).

I love Brian Keller’s VMs. I use them as the starting point for my TFS demos (which I’ve probably done hundreds of now). Brian’s latest VM with TFS 2013 is not quite what the 2012 one was (no reporting services or cube, no MS Project and a host of other things missing) but it’s enough to get started with.

One of the big new features of TFS 2013 is Release Management (with the acquisition of InRelease). An Brian provides a hands-on-lab that lets you kick the tires a bit. The lab starts with you making a small modification to the FabrikamFiber website, and then using a TFS build to trigger a deployment in InRelease. I dutifully made my change and queued the build – but the build hangs, and never completes. 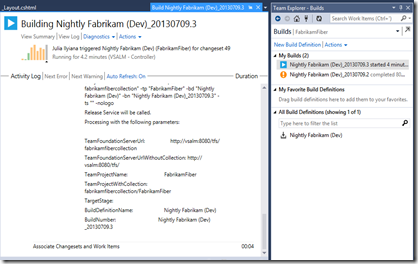 I can run other builds successfully, and if I turn off “Trigger Deployment” in the build, the build completes. That led me to conclude that InRelease was hanging for some reason. Neither the event logs, nor the InRelease logs had any useful info.

The Solution: Connect the VM to an External Network

I mailed Brian and he gave me a few things to try – the one that ended up working was connecting the VM to an external network. From that point on, the demo works as scripted. (Read this post to see how to connect your HyperV VM to your WiFi, and this one about connecting your VM to a 3G dongle).

I’m not sure why you need an external network for this – there seems to be some challenges in the networking logic of InRelease. This is just a preview release, so hopefully this gets fixed before release.

Anyway, if you’ve been having this issue while working the lab, then hopefully you can now continue to check it out.

One of my favourite reports in TFS is the Backlog Overview (Scrum) or User Story Overview (Agile). So after installing and playing with TFS 2013 Preview, I went to see what the report looks like. What I found wasn’t pretty: though I could