I am working on some code for the TFS Tester Power Tool with my colleague Anna Russo (who just got her first MVP award!) and we’re using TFS Preview for source control and work item tracking. From the start I wanted to get some unit tests and builds up and running. The challenge for the unit testing side was that the tool works against a Team Foundation Server, so testing required some sort of mocking or faking.

At around the same time I started looking at the unit tests, Microsoft released a beta of the Fakes Framework. I liked the look of the framework (especially since I had done some stuff with its predecessor, Moles), and decided to write the tests using it. However, I hit a snag with a bug in the beta. Fortunately, the RC fixed the issue, and so I was able to get the tests running.

So once Anna had granted me EditBuildDefinition rights on the hosted Team Project, I was ready to spin my first hosted build.

Here are my experiences.

I never check-out my entire source control folder for a build (and neither should you!). When creating a build, make sure the workspace is the minimum codebase that you need. Since I didn’t have a solution open, the workspace defaulted to the root of the Team Project, and you can see that it adds a cloak for the source controlled drops folder. At first I was a little puzzled at this, and then I realised that if you do check out your entire repository for your build, you probably don’t need the previous build outputs, so this default makes sense. However, when I changed the root folder to a subfolder a bit deeper in, and didn’t delete the cloak of the drops folder – the build failed since the cloak didn’t have an active parent folder. So I just deleted the cloaked entry.

I like that you can copy the output of the build to a source controlled folder – this makes sense for TFS in the cloud. However, I tried to then add a source control folder as the destination for the symbols, and of course the build failed since the symbols target must be a valid UNC (I wonder if there’s a way to get the symbols into Source Control…).

I like the Queue Summary page that comes up when you queue a 2012 build – it tells you how long the average build time for this build definition is and where your build is in the queue. 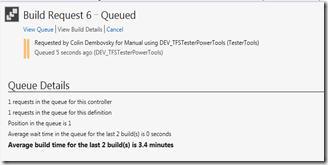 I think that if you have unit tests, you may as well enable code coverage. Enabling code coverage in a 2012 build is a little different than it was in 2010 (where you did it via a runsettings file). In a 2012 build (this applies to on-premises as well as hosted), you need to edit the “Automated Tests” parameter of the build (press the ellipsis button in the right-hand column for this parameter). In the “General” tab, you’ll see a drop-down under “Options” that you can select to enable code coverage. 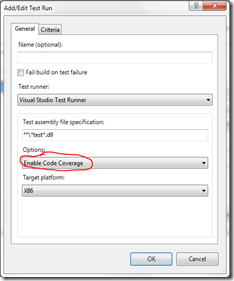 So I ran the build again and I bumped into a strange error. 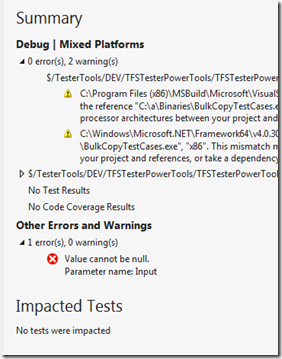 The error text wasn’t too helpful, so I queued the build again and changed the logging level to “Diagnostic”. That wasn’t too helpful either, except that I could see the error was happening in the catch of the Try-Catch around the testing activities.

After digging around in my ChampsList mail (one of the advantages of being an MVP) I came across Neno Loje’s mail about the same issue. Turns out there was a bug in the workflow which was fixed – make sure you use the DefaultTemplate11.1.xaml (as opposed to DefaultTemplate11.xaml).

Code Coverage and Fakes – not friends

So now I noticed that the tests failed – even though I’ve run them on a local on-premises TeamBuild with no issues. I disabled Code Coverage, and the tests pass! So it seems at this point in time I can get the tests to pass, as long as I don’t enable Code Coverage. I’ve mailed the ChampsList, so hopefully I’ll get a resolution to this soon.

All in all, it wasn’t too different getting a hosted build to work than getting an on-premises build to work. Once I get some resolution to the code coverage issue, I’ll get exactly the same functionality (I just have to figure out how to handle debug symbols elegantly…).

I am a huge fan of Lab Management. Being able to manage test rigs centrally (and, if you’re using Hyper-V, self-provisioning and self-servicing) is a huge productivity bonus. I wanted to test out a Standard Environment (what used to be called Physical Environment

So you’re sitting down planning some tests for your shiny new code, only to find that your code uses WebClient to download a file. No problem – you’ve been reading about Microsoft’s new Fakes framework, so you just right-click the System reference